Growing up in Houston, Texas was not always easy for Kim Roxie, founder of Lamik Beauty. She was kicked out of high school during her 11th-grade year. Thanks to her parents and their determination to see their daughter become a success, she was able to attend an alternative school so that she can pass her classes and graduate from public high school earning her diploma and preparing for college.

“I applied to Clark University and got in,” Kim shares with Econistas.com exclusively. “I made sure that I focused on my education and majored in public relations. I would not let myself or my family down.”

Just before graduating, Kim was not sure about the direction in which she would travel. Although she studied public relations, she was not guaranteed a job and she was getting desperate.

“I knew that I had to make a job if I couldn’t get one so I began to work on my beauty business,” Kim says.

For Kim, going into the beauty industry was as natural as the sunset rising. She knew that she wanted women to not only look good but to feel good. “I wanted to get the beauty out of people no matter their class, looks, whatever. My motto is: Beauty is revealed, not applied.”

“I was constantly thinking about makeup and it became more than looking pretty, it became about health. Click To Tweet

She elaborates, “Like, what we put on our skin and how often we find ourselves eating it. I did research and found out that women in a lifetime were digesting at least 14 lip glosses in their lifetime, and I thought about the fact that we have women with sensitive skin and how there were allergens that could cause damage to the skin.”

Kim conducted focus groups in which she learned that women felt good about themselves when they wore makeup. “It was my hopes to create a brand where people were not sacrificing their health for beauty. I wanted them to feel healthy and beautiful all at once. I also wanted to feel like I was happy with what I was doing, not just financially, but what I could do for people. I wanted to make a difference.”

She worked diligently to create a brand that is known as LAMIK (Love and Makeup in Kindness). It is an eco-chic, eco-friendly cosmetic company based out of Houston, TX. Worn by many celebrities that include Yolanda Adams, Cece Winans, and Tamron Hall LAMIK was inspired by many things that include her loving mother. “My mom was a classy woman so wearing makeup was a part of getting dressed. She was such a confident woman balanced with humility. She was a beautiful woman.”

She was also inspired by her own experience as a woman of a dark brown hue who had often been overlooked in the beauty department as less than beautiful.

“I use to be heavily influenced by the urban hip hop music produced by Houston rappers. It was a big thing in the early 2000’s,” Kim expressed to us. “There were many rappers who emphasized that beauty was light skin and it was one of the reasons why I wanted to leave Houston. It never acknowledged that women of darker colors were pretty. When I went to Clark Atlanta, they appreciated all beauty and especially us brown women. I knew it was where I wanted to be and what I needed to do.”

Determined to create a positive from her negative experience, Kim created a line of makeup that was about empowerment that included many hues for women of color. It also included her natural instinct to give back to her community.

“I think that we are a part of something larger, therefore, giving back is necessary. Being philanthropic is second nature to me. I can’t look around and know that I am doing good and others are suffering. I believe in being a partner with people in life so that we can help each other,” Kim expresses.

Kim also believes that living green is something that women of color have done naturally as it’s passed down from grandmother to mothers, and then their children. “I live a green life as much as possible. I would take hand-me-downs for my daughter. I try to go paperless as often as possible. I use soy-based ink for our printers. I can remember when my grandma would recycle Tupperware. I have experienced a green lifestyle since childhood.”

When it comes to business advice Kim makes it clear that it is not a smooth ride to success. There are a lot of rocky roads ahead and you have to have a strong head to stay in the game.
“Black women spend more than $7 billion dollars on makeup and not much of the money goes back into the African American community. There are a few African American eco friendly companies in the space right now but it is beginning to grow. It is not an easy or cheap business to invest in or create. For me, it had to be a calling. It is like a mission type of business.”

She offers this advice, “Don’t be deterred if you find that your competition is a big business. All businesses usually start off small. Don’t get tangled in mistakes, learn and grow from them.”
In addition, she also wants women to know, “as an entrepreneur, instead of being prepared for the journey, be available for it. God chooses the place in where he wants you to be. Just be open and accept it.”

Learn more about Kim and her amazing Lamik products at: www.lamik-beauty.com 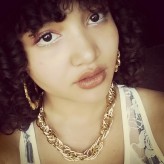 A true believer in the art of fashion, true beauty and the power of being a girl, Tweety Eliou loves to share lifestyle hacks that help people achieve their best life.

Your Beauty Ritual Can 'Naturally' Begin With Stephanie Flor, Founder of Around The World Beauty

Leah Thomas: On Why Adopting A 'Green Attitude' Is The 'New Black'